February 07, 2018
To the best of my knowledge and extent of my Google-fu, there has been no one that has documented going to Aokigahara AKA "the Sea of Trees" (or "Sea of Forest" according to the Engrish of the Wind Cave parking lot's map of the area, and also known as, unfortunately, the "Suicide Forest"), and sleeping overnight completely alone among the alleged ghosts and scattered remnants that numerous tortured souls have left behind.

There are several videos and blogs of people either going in at night to “ghost hunt”, or of pairs or groups going in to stay overnight, but no one seems to have been bold (insane) enough to document going in there and sleeping ALONE overnight in Aokigahara, and thus leaving one's self vulnerable to whatever creatures, other residents (alive or...other 😧).
Until now...

First, a bit of background. After hiking through Aokigahara during my Sea-of-Trees to Summit hike of Mt Fuji:

I started checking out the numerous Aokigahara videos on YouTube, and I kept seeing the same factually WRONG information, and the same challenge (to spend the night there) in the comments. After looking at the most popular videos and checking videos and blog posts in both English and Japanese, I realized that no one had documented going into the forest and *sleeping/camping* overnight completely ALONE. Some have gone "ghost-hunting" and several camped overnight with others, but no one has seemed to have videoed or blogged about doing it alone. So I said, Challenged Accepted, Bro!

As I prepared for the trip, it occurred to me that doing a solo trip was also the perfect time to bust some myths as well, which can be seen in the video.

It has  been almost a year since I uploaded my Overnight Alone in Aokigahara video, and it has become my most watched video. It received over  1500 comments, almost all of them overwhelmingly positive, and with many encouraging me to make more videos. The positive feedback was much appreciated.

Let's talk about the negative feedback a bit. My haters fell basically into two categories: the "Hurr durr GHOSTS ARE REAL, MAN!" true-believers, or the garden-variety name-calling trolls that usually got deleted immediately. I have no problem with differing opinions..I do have a problem with those that just want to be dicks, and not engage in a mature and rational discussion of different viewpoints.

To the credit of the true believer crowd, some presented a mature discussion of their beliefs, but not one has been able to provide a link to a scientific study that supports their "Ghosts are Real!" position.

Having my video get such a response (and resulting in me finally getting PAID a tiny bit of beer money from Youtube...Woo-Hoo!) was quite educational, and quite motivating to see that even though *I* thought the vid could have been MUCH better, many people said that the liked my "style", so...COOL! It is Game On with my YouTube game!

I learned that seeking to make the "perfect" video is time wasted, that most people can see and appreciate when you are being genuine with them, and that people are more often accepting of you than your are of yourself. Unless you are a truly evil person, for most people, the voice that tells us we aren't good enough is a &$%#@# LIAR...so don't listen to it! Positivity is the winning move! 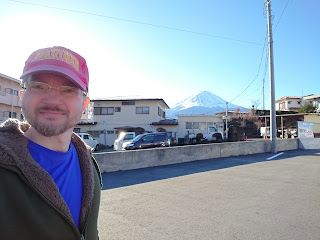 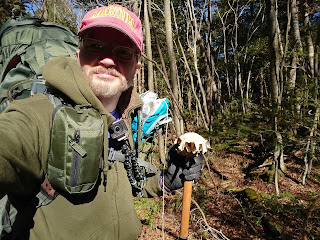 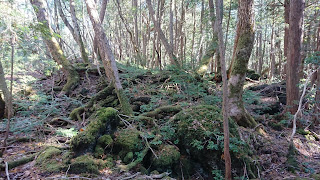 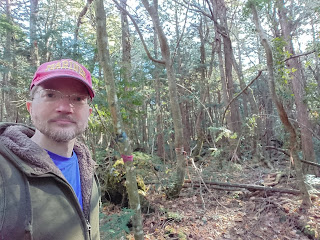 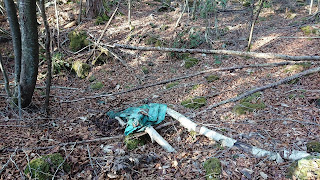 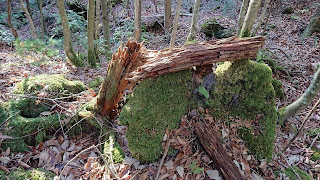 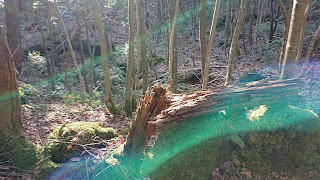 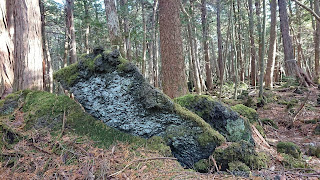 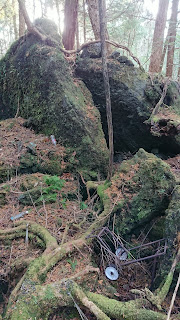 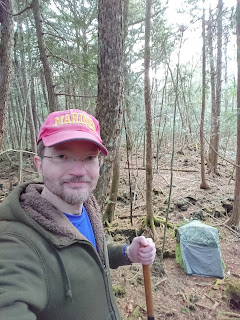 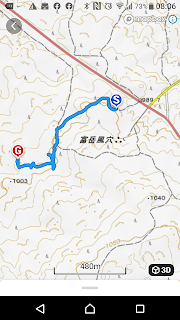 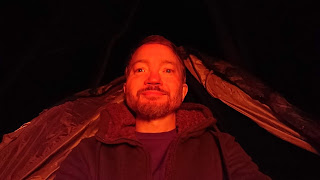 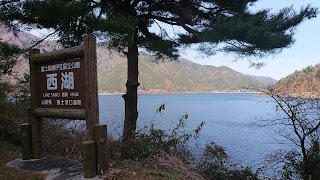 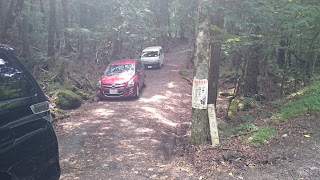 ...and back into the heart of the forest we dove:


And found holes...BIG holes. In this area (south east of road 71/northwest quadrant of Mt. Fuji's base) there were several large caves and holes, seemingly in much more abundance than near the Lava & ice caves.


Whatever this root curled around obviously came out the loser in what was likely a years-long fight for survival...
Based on the shape, I think this should be called Jabba the Cave. This is connected to a 2~3 km long cave.

Some creepyness here. I wonder who and why(??!?) did someone (...or something?) feel the urge/need to look for several softball-sized rocks and pile them up like this...
...and I hope this lonesome hat we found on the trail was dropped by accident, not because the owner had no use for it (and life in general) anymore. Either way, we left it where it was...
After having gotten off the trail earlier in the day, it was good to know we were back on the right path... 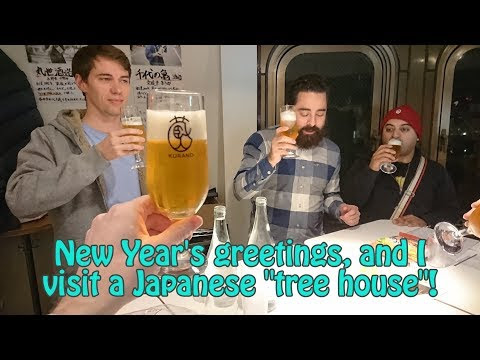 Since it looks like ScrewTube will be taking away my Partner status, I plan to try and make up for it by trying to direct more traffic here to my blog. It will likely be years or possibly never before I ever get paid from Adsense, but I gotta do, right? Besides, I am a far better writer than I will ever be video presenter/vlogger, so I need to make better use of my writing abilities in getting my message out.I counted, and was rather disappointed to see that I only uploaded 6 damn videos last year. I can.. I MUST up my game this year and I am already slacking, but I'm back in the game with a new video....YAY!